Mawuli suffers from an important psychomotor deficit. He doesn’t hold his head on his own, he is not able to sit up, and he doesn’t walk. This is due to the state of severe undernutrition he has suffered from. In order to support Mawuli and his family, we have financed a monthly food supply. We have also helped his mom set up her own business, so that she could become self-sufficient in providing for her family. 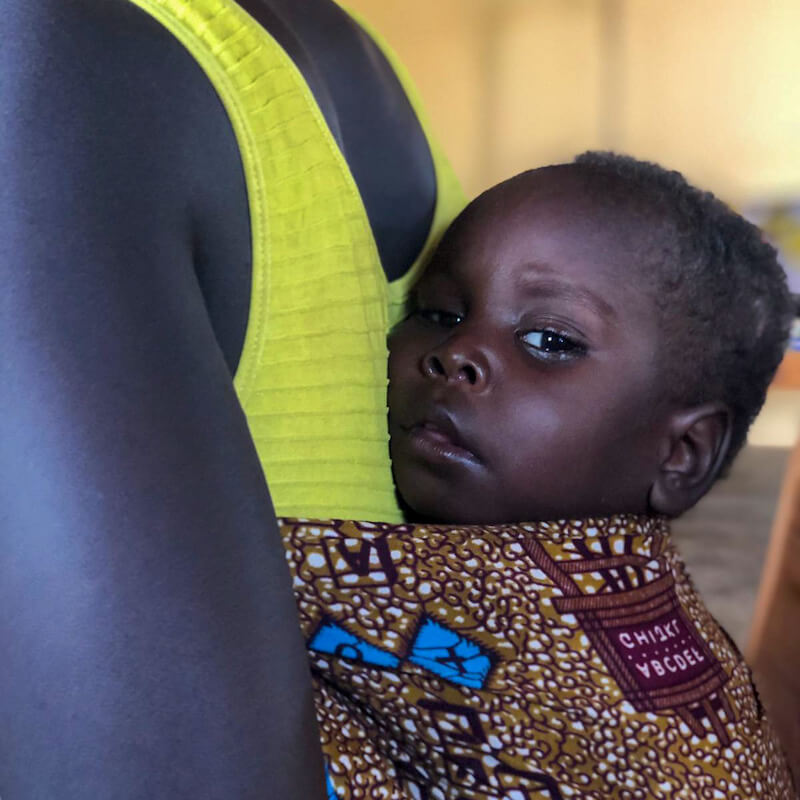 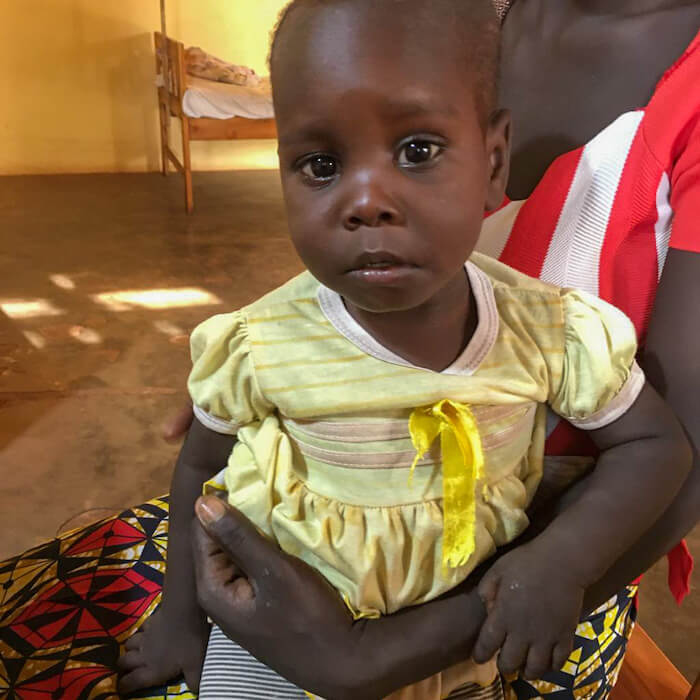 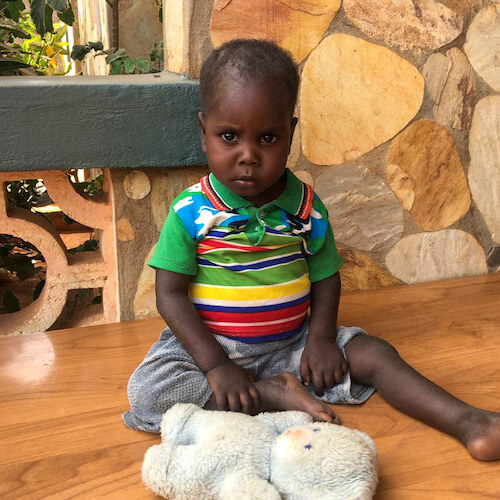 At two years and six months old, Mawuli has finally passed 8 kg, after a slow weight gain. He still has a significant psychomotor delay. He is not walking yet, but has made some progress. 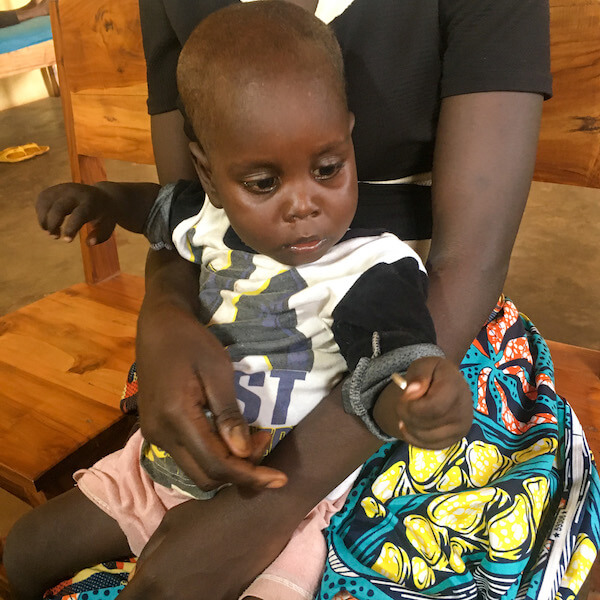 Mawuli was received at the center with his cousin. Both had fever and vomiting. They were suffering from malaria, for which we gave them the necessary treatment. They are already much better! 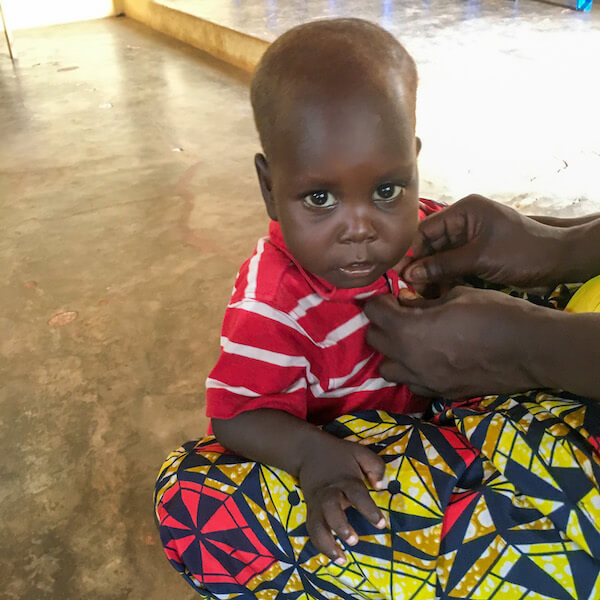 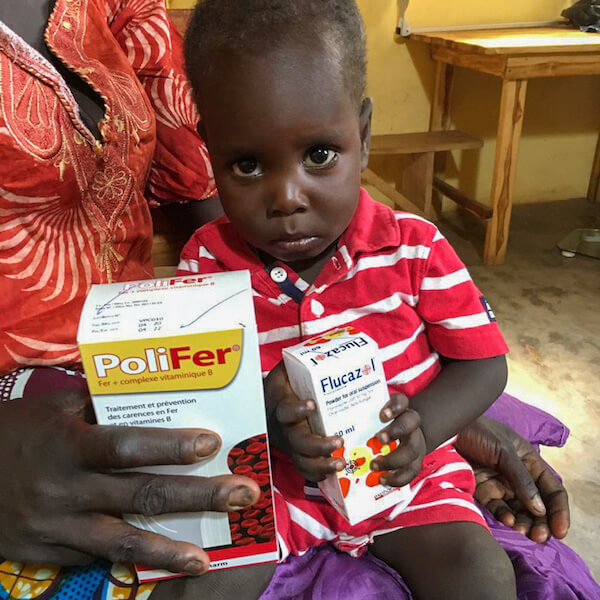 Mawuli had severe malaria which we treated. He has gained some weight, but is still undernourished. The paleness of his conjunctiva revealed anemia for which we gave him the necessary treatment. 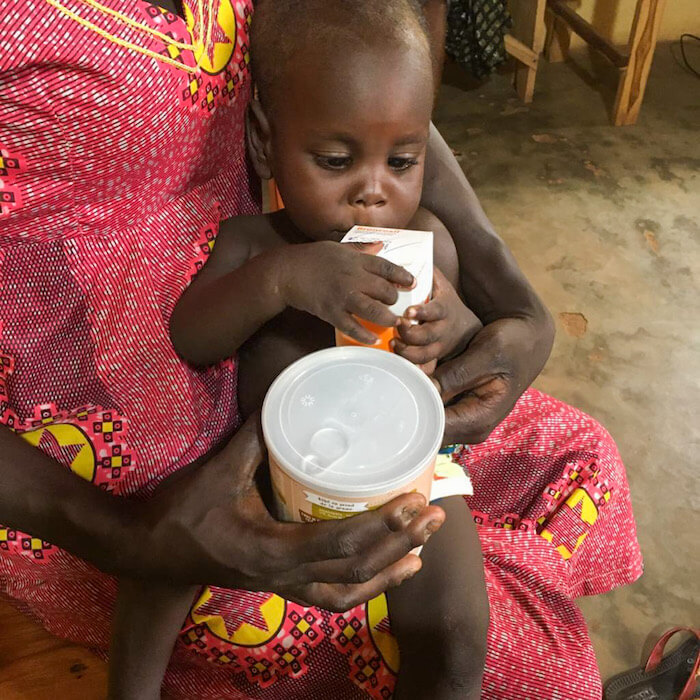 Mawuli came to the center with a beautiful smile. He weighs 8.03 kg and is now out of his state of moderate undernutrition. 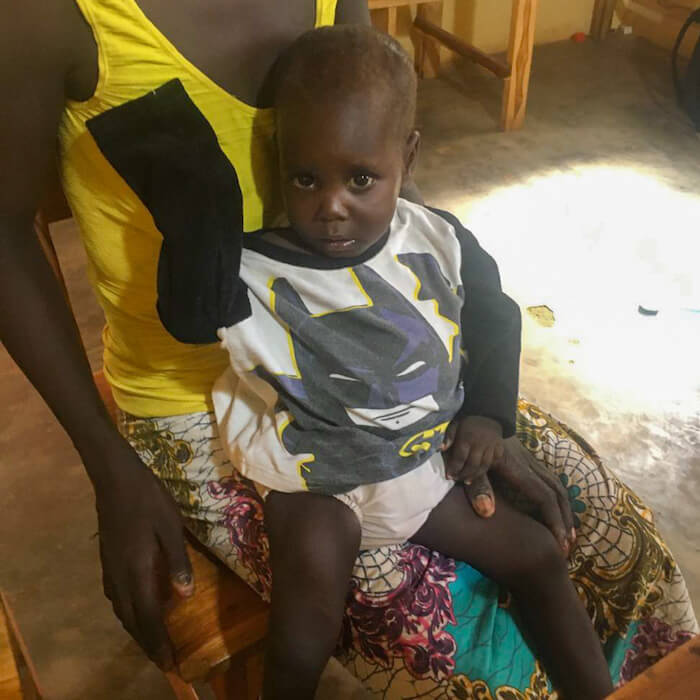 Since the beginning of his care, Mawuli’s weight has varied between 7 kg and 8 kg. He is struggling to gain weight. He currently weighs 7.62 kg and just turned 2 this week. We gave him ready-to-use therapeutic foods.

Mawuli was sick with symptoms of gastroenteritis. He lost 900 g in ten days. We gave him the necessary treatments. His mom was suffering from malaria. We gave her an injection of arthemeter (treatment against malaria) and we gave her an anti-anemic treatment and paracetamol. She also had abscesses all over her body which we treated. 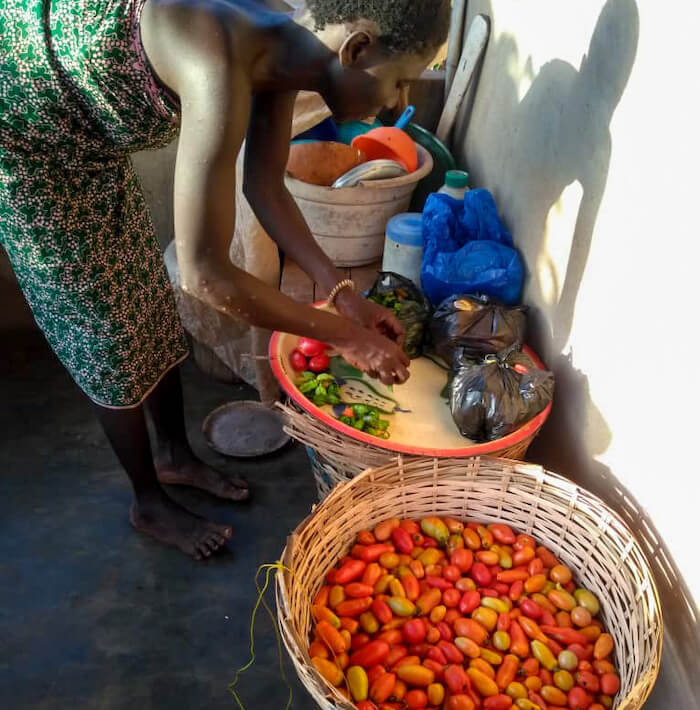 We visited Mawuli and her mom, and we were pleased to see that her tomato selling business is doing well!

Mawuli is doing well. We have financed his mother’s business (resale of tomatoes and peppers). We will go back soon to visit her home to see how the business is going. We have also financed a “stroller” which will be made by a carpenter. Indeed, at almost two years old, because of his state of malnutrition, Mawuli still does not walk. The stroller will allow him to stimulate his motor skills. Mawuli weighs 7.93 kg and is still in a state of malnutrition. 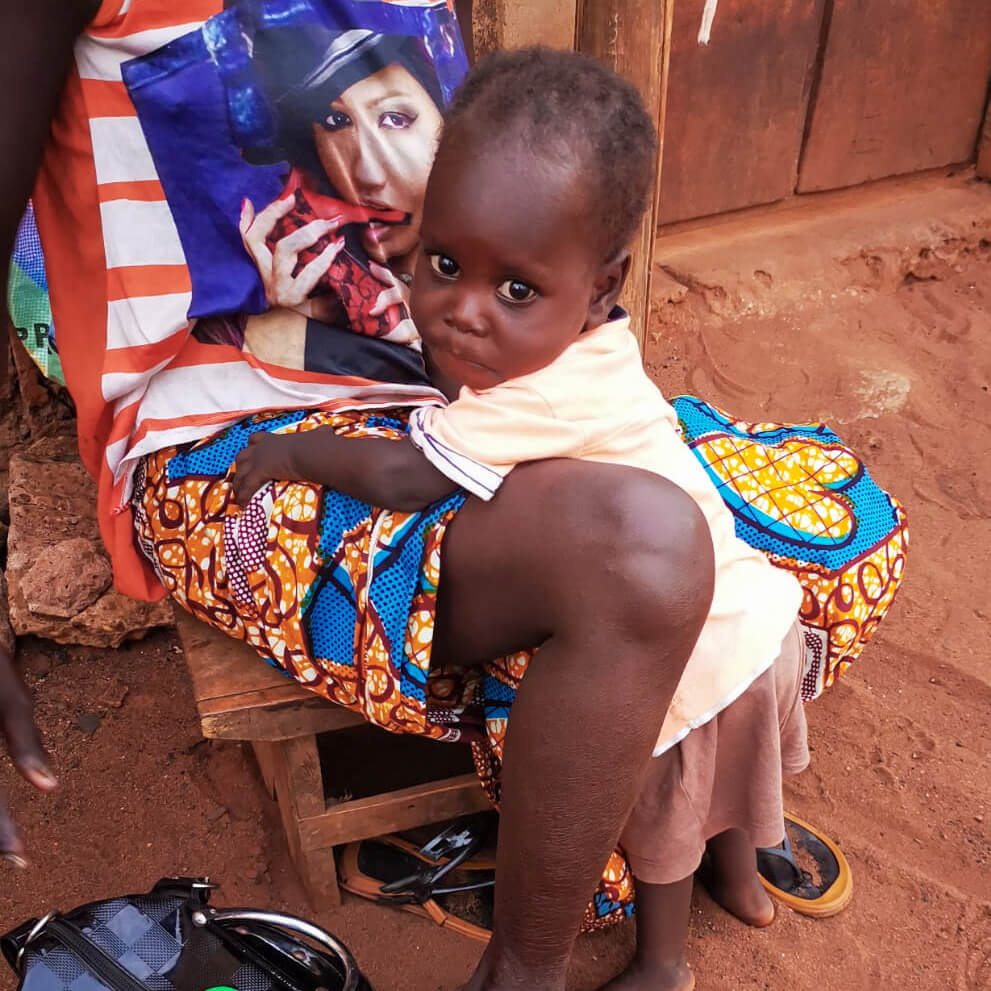 Mawuli is starting to stand up. His mom told us that she could not continue her business because she has to stay with her sick grandmother. When her health improves, she wants to start her business again, and she plans to leave her aunt’s house to live with her two children. We will support her in this project. 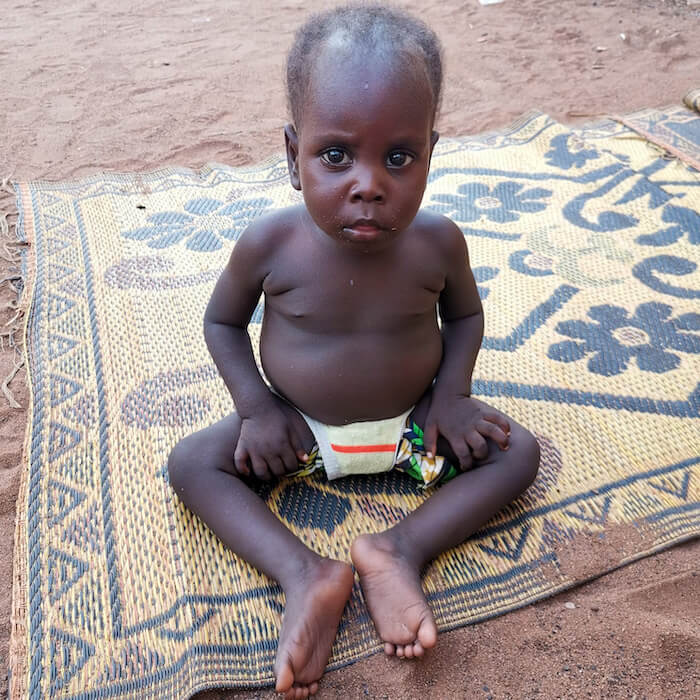 Mawuli was suffering from hyperthermia and cough this week. He had a fever of 38,5° and his conjunctiva were moderately colored. We gave him the necessary treatments and reminded his mom that it is important that he sleeps under a mosquito net. Mawuli can now sit up on his own and is becoming more and more active. 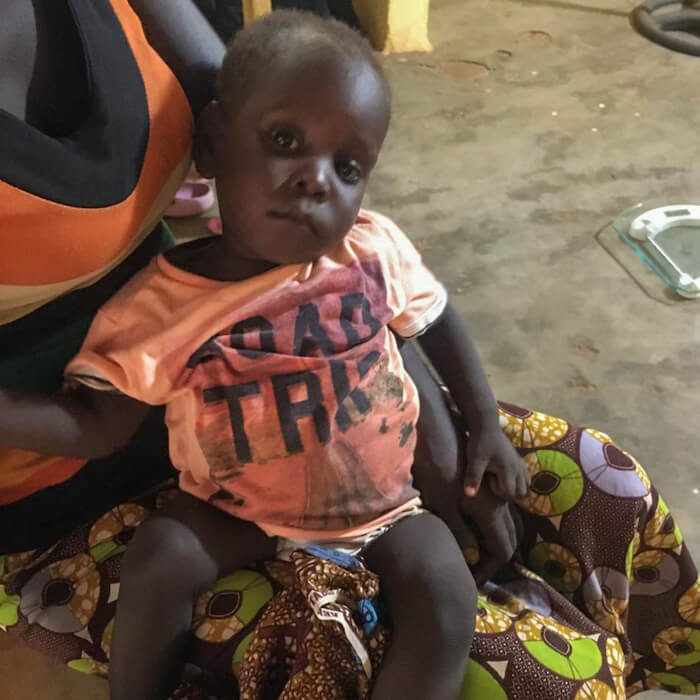 Mawuli has gained 100 g and now weighs 7.95 kg. He is in great shape and is starting to walk on all fours. We reminded his mom of the importance of the required vaccinations. Indeed, he was not up to date at the beginning of the care, but we had caught up with his delay. 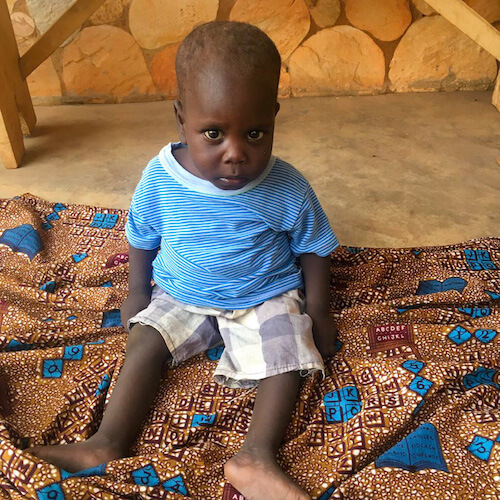 Mawuli is doing well and has gained over 300 g since the last visit. The business we financed for his mom is doing very well and we did not need to give them a food supply this month. 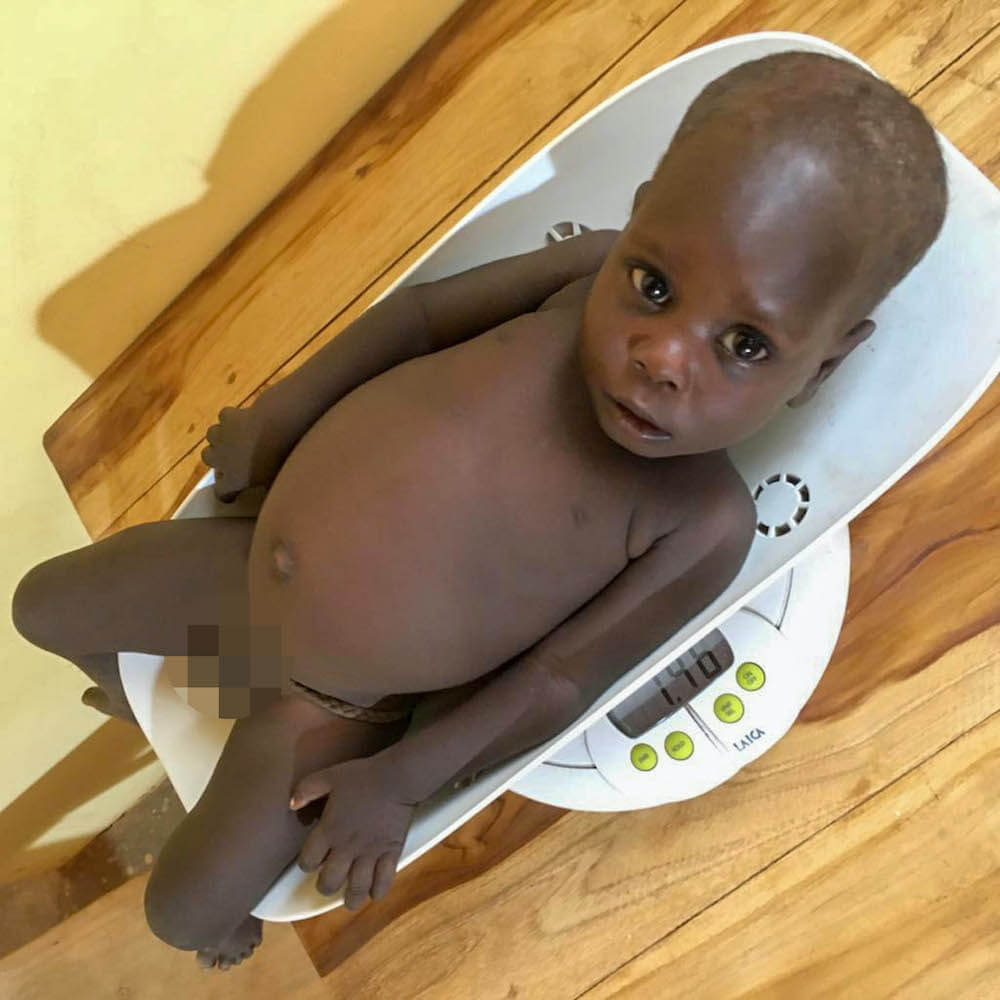 Mawuli weighs 7.47 kg and has not gained weight since the last weighing. However, his mom tells us that he eats very well. We have helped her with her small food business and have financed the initial supplies. We will observe how she manages her business and support her if needed. 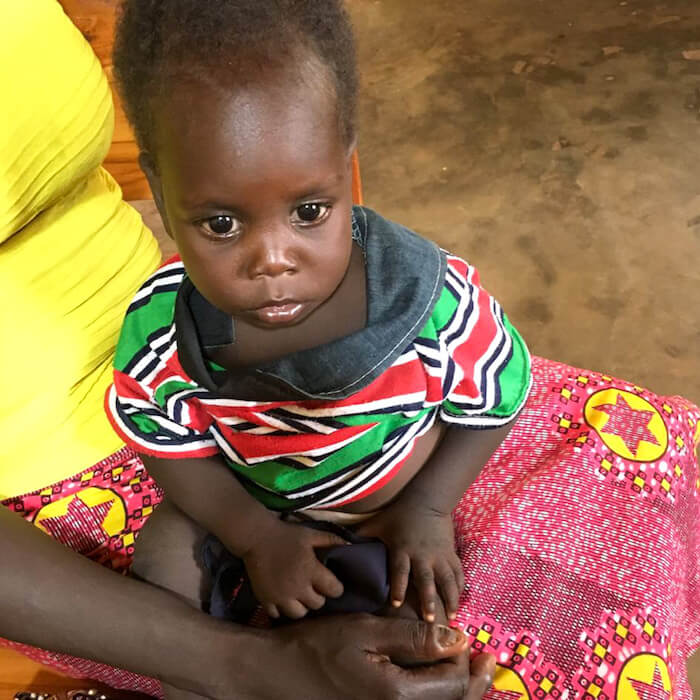 Mawuli came to his weekly appointment. His health has improved significantly and he is still on medication. He has gained 400 g since the last weigh-in 10 days ago! 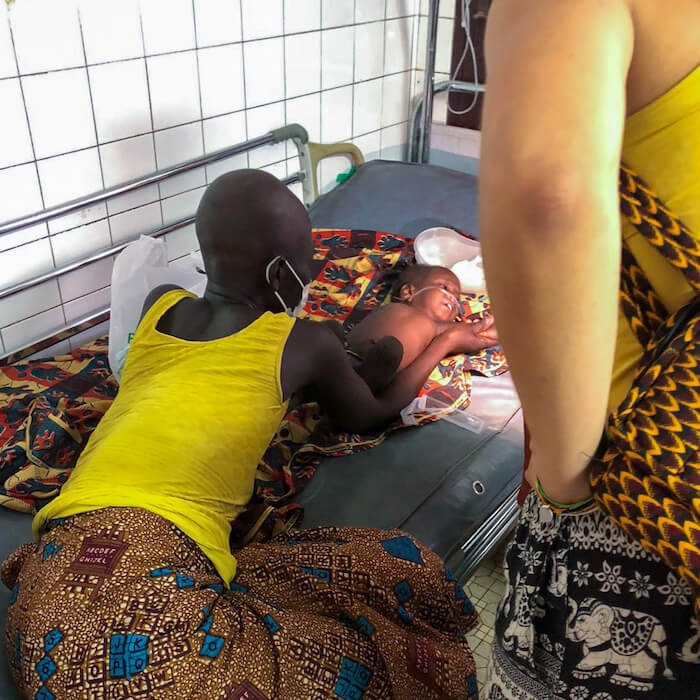 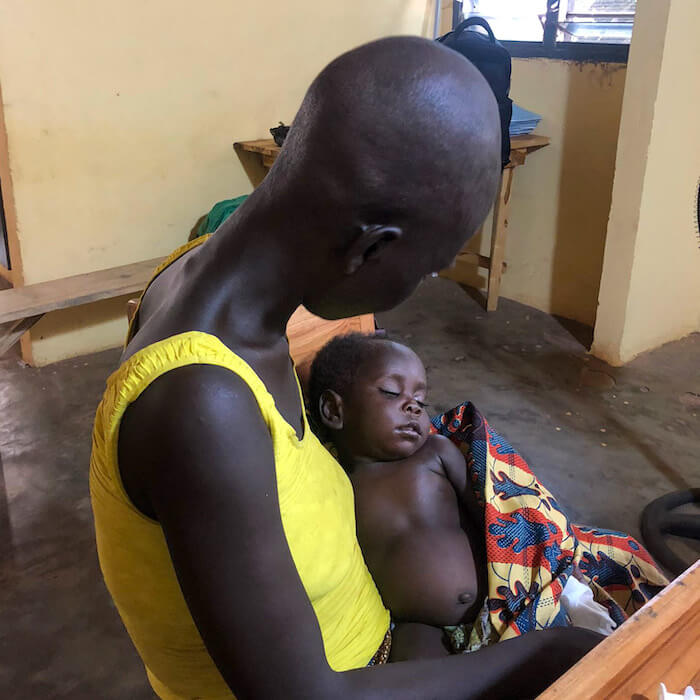 Mawuli came to the center in an emergency. He showed signs of respiratory distress, a bronchiolitis-like cough, vomiting, and a temperature of 40 degrees. He was semi-conscious. We took him to the Hospital of Tsevie. He was quickly admitted to the intensive care unit for lack of oxygen (70% saturation instead of 100%), and was put on oxygen tubes and a perfusion. Once on oxygen, he recovered very quickly. He seems to have had bronchitis or pneumopathy which, with his state of malnutrition, quickly degenerated. He was discharged the next day and was doing much better. We financed his hospitalization and the prescribed treatments, namely: antibiotics, paracetamol and anti-tussives. 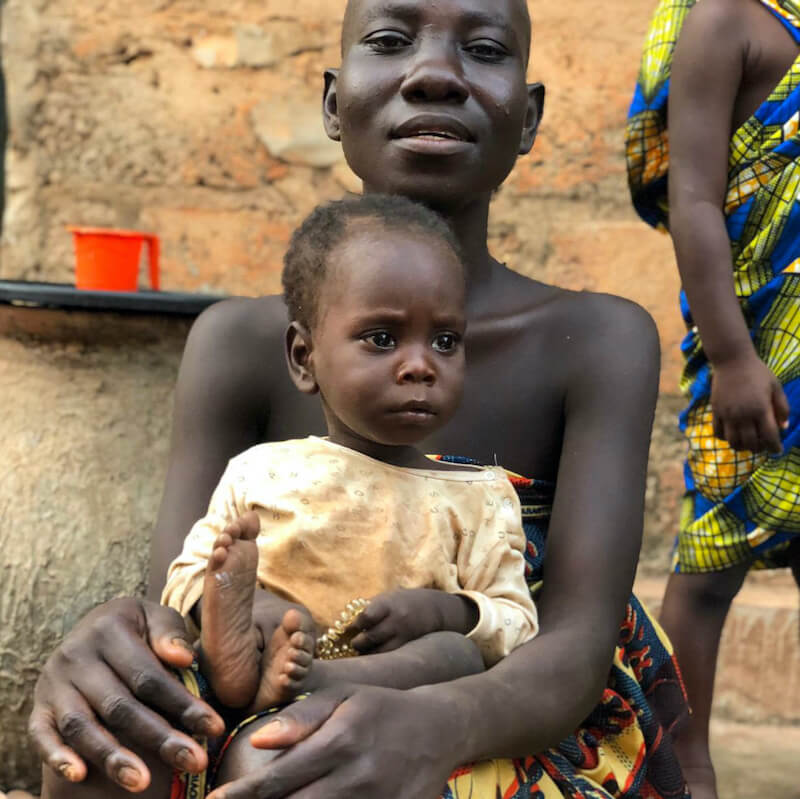 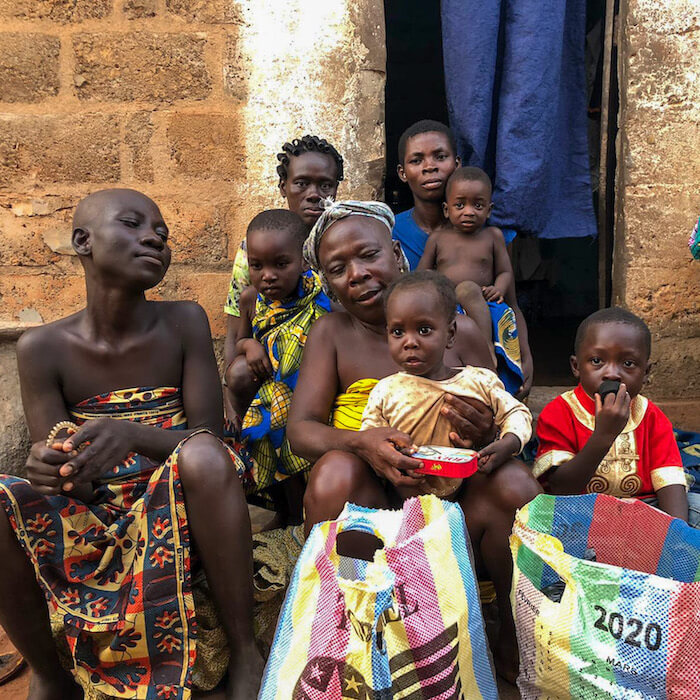 We visited Mawuli to offer the first food supply to the family. We discussed the business that we want to help them set up. We will see them again on Thursday at the polyclinic.